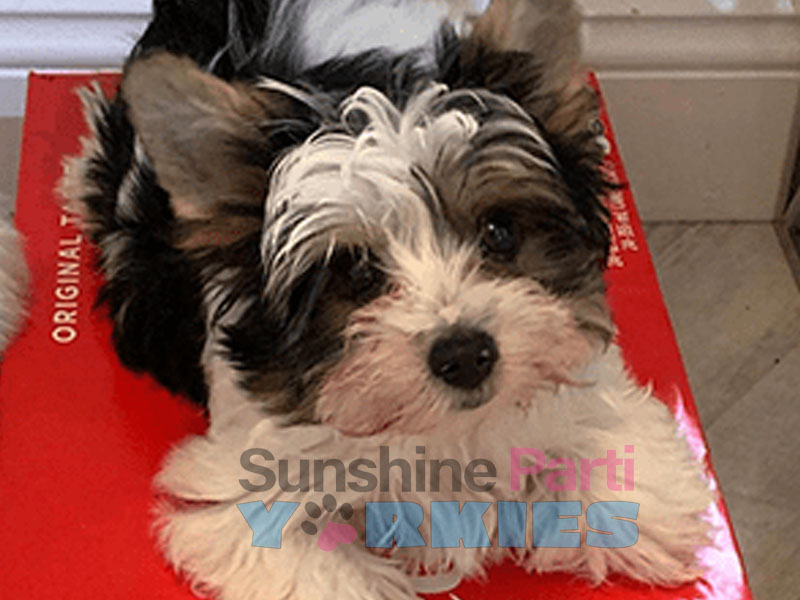 Whether you realized it or not, you?ve probably seen or encountered a Parti Yorkie. They are considerably different in color from your standard Yorkie so you would not likely have made the connection between the two. That said, Parti Yorkies are incredibly adorable little dogs that are impossible not to fall in love with instantly. You were probably left with any number of questions, the biggest of which is? What kind of dog is that?

The following is in no particular order of importance but lists 10 Common Questions we get about Parti Yorkies:

You are likely already familiar with the Yorkshire Terriers breed so it?s important that you know that a Parti Yorkie is not a separate breed from a Yorkshire Terrier. They are in fact one in the same, just with different coloring. There are some great articles out there that provide a more detailed explanation of how a recessive gene (the piebald gene) in a breed that is traditionally known to be black and tan, produced the Parti color combination of black, tan and white. The term ?Parti? refers to the color, not the breed.

#9 Can a Traditional Yorkie Have Parti Yorkie Puppies?

#8 Are Parti Yorkies Recognized by the American Kennel Club (AKC)?

The answer to this question is YES! The AKC concluded that the traditional purebred Yorkshire Terriers can in fact produce differently colored Yorkies. It?s genetics! In fact, back in 2000, the AKC began accepting registration of Parti Yorkies with the color code of 014. Once Parti Yorkies were officially recognized by the AKC, many breeders started breeding them.

So, where does all the confusion and misinformation come from? The YTCA (Yorkshire Terrier Club of America) states that the Parti colored Yorkie is not standard, which has incorrectly led some people to interpret that to mean they are not purebred and therefore cannot be registered with the AKC, which you now know is inaccurate.

#7 How Many Colors Do Yorkies Come In?

Yorkies come in many colors and all of them are beautiful!

As we mentioned previously, once the Parti Yorkies were officially recognized by the AKC, many breeders started breeding them.

#6 How Much Do Parti Yorkies Cost?

For many of us, price is an issue, however, we must take price versus value into consideration when addressing this topic. What are you getting for your money? Here are some questions you should consider asking before you buy: How are the puppies cared for? What are their living conditions? Have they been to the vet? Will their shots be up to date upon delivery? Are their parents onsite? Do they come with a health guarantee and/or health certificate? Can they be registered with the AKC? Good breeders will be happy to provide proof and references upon request.

Now for the answer to this question… Pedigree Yorkshire Terrier puppies with their AKC papers are often sold in the range of $1,800-$2,300 USD or more.

#5 What if I Have Dog Allergies?

It is often said that a dog is man?s best friend but that may not be the case, if the man is allergic to his dog! Pet allergies are quite common in the United States and it?s estimated that 15% to 30% of all Americans are affected. While allergies to cats are almost twice as common, allergic reactions to dogs tend to be more severe. But you?re in luck because Yorkies are considered to be hypoallergenic! This makes them a great option for people with dog allergies because Yorkies have hair as opposed to fur, and they don’t shed. Now for the disclaimer, according to AKC, there is no such thing as a 100% hypoallergenic dog, so don?t go throwing away your allergy meds just in case!

#4 How Long Do Yorkies Live?

Yorkshire Terriers have a life expectancy of between 11-16 years. And while Yorkies are generally healthy, they are susceptible to health problems associated with their size and breed. As with any breed, regular vet visits and care can certainly contribute to their longevity.

#3 What are Some of the Health Concerns Associated with the Breed?

#2 How Much Exercise Do Yorkies Need?

Your Yorkie should be taken for a walk a minimum of 1 time per day though twice daily is recommended. Once in the morning and again in the evening is good. The actual time of the walks isn?t as important as having a schedule. You?ll find all breeds better behaved when they have a daily schedule.

There?s moderate exercise ? such as daily walks at a steady pace or cardio exercise which is shorter in duration but more intense activity, such as playing fetch. You?ll find the benefits to daily exercise for your Yorkie numerous with one important result being it helps a dog release that pent-up energy that may otherwise be directed in a negative ways such as excessive barking, destructive chewing, and things of that nature.

Yes, you absolutely can adopt, or you can consider fostering. Ask your local animal shelter about Yorkie Rescues. We believe that every animal deserves a good life and a good forever home. We have worked with local animal rescues, we?ve fostered, adopted and helped rehome some very deserving animals. We suggest you check with local rescue groups as they may have networks across the US dedicated to Yorkie dog rescues.

An there your have the 10 common questions we are asked about Parti Yorkies! If you have more interest on this topic, please scroll down to watch our YouTube Video.